By Marie, an Ex-Christian Scientist Group contributor. Marie is a pseudonym.

The college encouraged school spirit. They told you to spread the word about how great the place was. You felt pressure to participate in your House’s events. Some asked you to leave your doors open. You had no choice but to leave them unlocked. The door locks had been broken, if the doors were built to have locks at all. If items were stolen, students were taught to pray about attachment to material objects.

When I was there, only the women’s dorms were locked and only during certain hours. We had no control over this, and sometimes the security guards locked the doors early or forgot to lock them entirely. Because students didn’t need to carry keys most of the day, women often forget their keys and got locked out or had a virtual curfew that men didn’t worry about. Whenever students discussed the injustice and sexism of this practice, people replied, “Life isn’t fair.” Even after a male student was beaten by a group of men who came from off campus, it was up to the male students to decide whether to lock their dorms. We were told that state law required women’s dorms to be locked. When brought up specifically with the administration, they admitted that this was untrue. Administrators blamed ‘student rumours’ on this falsehood.

Men and women lived in separate hallways, usually separate dorms. Spying on and reporting one another for breaking rules, including visiting the hallway or room of the opposite sex during specific hours, was called moral courage.

People occasionally disappeared. It was a mystery as to whether they were suspended due to having sex, falling ill, or getting hurt and taking medicine or staying in the hospital, or attempting to commit suicide. Perhaps they simply transferred to another school, or maybe they committed an actual crime. Rumours ran rampant because, (1) people fiercely guarded their frequently violated privacy, and (2) speaking about ‘bad’ things was discouraged.

This made activism difficult. Pointing out the evil in the world and fighting it with material means was looked down upon and outright silenced. It was more important to focus on the community than on the outside world. Then again, protesting the administration was also highly regulated if allowed at all. For example, at that point, students could only be homosexual if they actively tried to pray the gay away and remained celibate. Protesting this rule was considered ‘homosexual activity’ which was forbidden.

The campus itself was beautiful and clean. The school offered several amazing opportunities, including a fabulous array of abroad programs. Most of us felt comfortable leaving our bags out when grabbing lunch, trusting that nothing would be stolen in this small religious community. Considering the very limited options, the food was good, and the dorms were lovely. The dorms were one of several things that reminded me of Harry Potter. We were an incestuous, tiny school of magical outsiders.
END_OF_DOCUMENT_TOKEN_TO_BE_REPLACED

By Marie, an Ex-Christian Scientist Group Contributor. Marie is a pseudonym, to ensure anonymity. I stepped away from Christian Science, as a test. I spent a week not worrying about animal magnetism, or daily prayers, or anything like that. I just thought whatever I wanted to think. I then left CS quite suddenly and found that to be extremely difficult. I still do sometimes, especially when things are tough and I don’t know what to turn to. Some people I know who left CS after always doubting didn’t feel like it was such a big deal. We all handle it in different ways.

Outsiders simplify the issues surrounding Christian Science, and that can feel dismissive. Like, ‘Hah! What a bunch of crazy, stupid kooks.’ I was one of those kooks, as are many intelligent people I love. Not to mention, in a way, it trivializes what I’ve gone through. The other day a friend asked why my roommate and I talked about our past so much. It was because it was important to us and shaped who we are. To him, it seemed something to remember and value or grieve but not to dwell on so much. 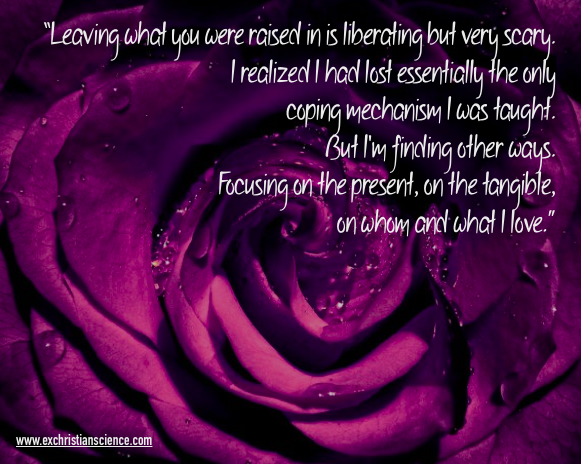 I still don’t feel ready to read God’s Perfect Child. I found it in a used book store and started reading it. I had to sit there for a few moments because I felt very overwhelmed. I couldn’t bring myself to buy it. My parents often talked about the book, shaking their heads, especially since my dad taught the author in Sunday School. So of course he blamed himself.

I would describe myself as an atheist now, but I also realize that literally no one knows for sure how the world works and what’s out there. It’s been a long and very difficult journey. I keep discovering new ways in which I’ve imbibed Christian Science ideology, occasionally for the better, usually for worse. I feel as though I have to construct a whole new identity and learn how to trust myself. Not practitioners, not God. Me.