This is part of our series Where did “Science & Health” come from? This post briefly covers Emanuel Swedenborg, Bishop George Berkeley, and Georg Wilhelm Friedrich Hegel.

From the Swedenborg website, under ‘Cultural Influence’ they discuss

One of the most enduring movements involving spiritual healing was initiated by Mary Baker Eddy (1821–1910). Mrs. Eddy’s ideas, and even her very wording, are in some instances so similar to Swedenborg’s that many people have concluded that Christian Science is derived from Swedenborgianism. While Swedenborg never advocated exclusive reliance on spirit to heal the physical body (as did Mrs. Eddy), he did write voluminously on the interconnectedness of soul and body—an awareness that is now gaining ground in modern medicine. Thus Swedenborg’s influence continues to be felt today—especially among artists, spiritual seekers, and people who like to think “outside the box”!

It is worth reading The New York Times piece dated August 18, 1907 comparing Eddy and Swendenborg. In addition to offering an interesting analysis of their respective works, it also offers a side-by-side comparison of Swendenborg/Eddy. 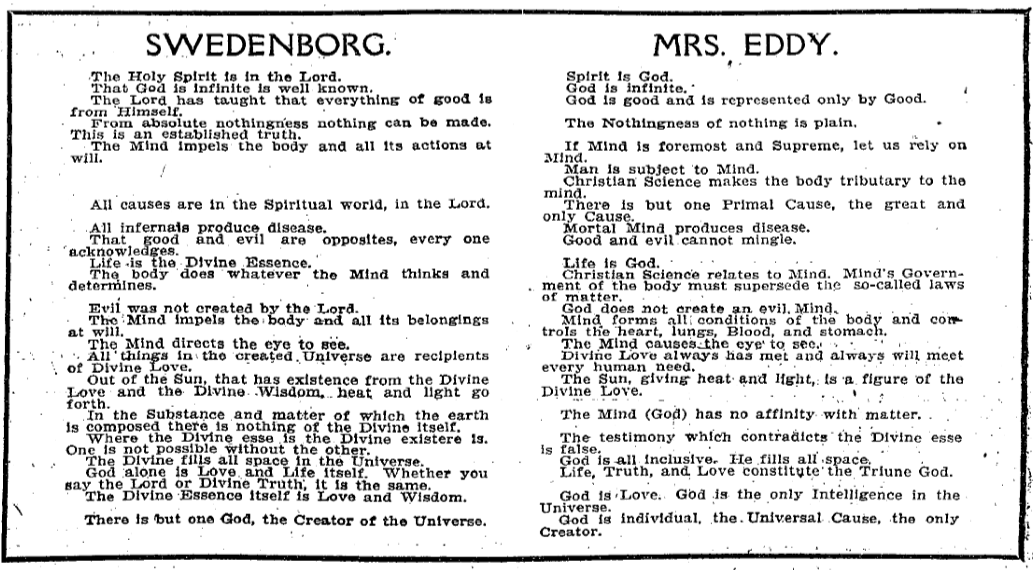 George Berkeley (1685 – 1753), aka Bishop Berkeley, was “an Anglo-Irish philosopher whose primary achievement was the advancement of a theory he called “immaterialism” (later referred to as ‘subjective idealism’ by others). This theory denies the existence of material substance and instead contends that familiar objects like tables and chairs are only ideas in the minds of perceivers, and as a result cannot exist without being perceived.”

Berkeleianism: George Berkeley’s philosophy of subjective idealism, which holds thatmaterial objects have no independent being but exist only as concepts in God’s mind and asperceptions of those concepts in other minds

I’m going to let the Basics of Philosophy sum up Berkeley’s view of reality:

There exists an infinite spirit (God) and a multitude of finite spirits (humans), and we are in communication with God via our experience. Thus, what we take to be our whole experience of the world is analogous to God’s language, God’s way of talking to us, and all the laws of science and Nature we see around us are analogous to the grammar of God’s language. There is, then, in this theory, no need to postulate the existence of matter at all, as all reality is effectively mental.

I suspect this is another case of Ms. Eddy took the idea and ran with it in her own direction, as can be seen when Ms. Eddy defines Man, in Science and Health, on p. 541.

Man: The infinite idea of Infinite Spirit; the spiritual image and likeness of God; the full representation of Mind the idea of Principle, not person; the compound idea of God, including all other ideas; the generic term for all that reflects God’s image and likeness; the conscious identity of being, as found in Science, where man is the reflection of God or Mind and therefore is eternal that which has no separate mind from God; that which has not a single quality underived from Deity that which possesses no life intelligence or creative power of his own, but reflects all that belongs to his Maker.

Georg Wilhelm Friedrich Hegel (1770-1831) was a German philosopher, he had much to say on a variety of topics.

There is an entire book alleging that Ms. Eddy took her ideas from Hegel. Mrs. Eddy Purloins from Hegel was written by Walter M. Haushalter and copyrighted in 1936. I have not read the entire book, merely skimmed the first few pages. Haushalter makes reference to Ms. Eddy’s ‘literary dualism’ -– something many have remarked on over the years, and anyone who reads the 1875 version of Science and Health will also wonder how Ms. Eddy turned out the 1910 revision. Ms. Eddy Purloins contains some true gems, on p. 4, Haushalter remarks

Often, after stumbling though a foggy swamp of subjectivism, one merges upon a page or half-page of terse, clear, brilliant metaphysics worth of a Kant or a Royce. It is this dualism ofcrude mythology and valid science, of wild chaos and stately order, of non-sense and sense, that exasperates.

Haushalter’s thesis is that Ms. Eddy copied her work from the Leiber Documents, a collection of works by Dr. Francis Lieber, a distinguished German-American publisher and authority on the philosophy of Hegel (4). According to Haushalter, one example of this plagiarism is none other than the Scientific Statement of Being, found in the 1910 version of Science and Health on p. 468. The following is from Ms. Eddy Purloins on p. 28:

This is part of our series Where did “Science & Health” come from? This post briefly covers two Phineas Pankhurst Quimby – her mentor and James Henry Wiggin – her editor.

While Ms. Eddy was undoubtedly influenced by Quimby, the general consensus is that the conclusions she came to are entirely her own. Eddy biographer Edwin Dakin sums up their relationship when he writes:

“Others of his pupils lost themselves in Quimby’s philosophy, but Mrs. Glover lost Quimby in herself” (Dakin, 92).

Eddy biographer, Gillian Gill devotes a number of pages to the issue of Ms. Eddy and P.P. Quimby. We must, however, be mindful of Gottschalk’s research in Rolling Away the Stone. On page 72 he writes

George Quimby, a strong champion of his father’s originality, wrote, “Don’t confuse his method of healing with Mrs. Eddy’s Christian Science, so far as her religious teachings go… The religion which she teaches certainly is hers, for which I cannot be too thankful; for I should loath to go down into my grave feeling that my father was in any way connected with “Christian Science.”

Eddy’s history and correspondence with Quimby speaks volumes on it’s own. We highly recommend checking out some of the original sources, including The Quimby Manuscripts Showing the Discovery of Spiritual Healing and the Origin of Christian Science by Phineas Parkhurst Quimby  January 1, 1921, Ms. Eddy (then Mrs. Patterson)’s letters to Quimby (found in Ch. 12 of the aforementioned Quimby Manuscripts) and McClure’s Magazine, Volume 28.

Mary Baker Eddy’s editor (for a dozen or so editions) was Reverend James Henry Wiggin. Wiggin undoubedly played an important role in crafting Science and Health.  As Gillian Gill points out on page 217 of Mary Baker Eddy:

It is a truth universally acknowledged that the earliest editions of Science and Health, put out before Mary Baker Eddy could afford the editorial assistance of educated gentlemen such as the Reverend Wiggin, were little more than illiterate ramblings. (Gill, p. 217)

What Mr. Wiggin did for Science and Health was to put  into intelligible English the ideas which Mrs. Eddy had so  befogged in the stating of them. Any one who reads a chapter, a page, or even a paragraph of the 1884 edition, and compares  it with the same portion in the edition of 1886, will see the more obvious part of Mr. Wiggin’s work. (Milmine p. 329)

Several articles stating that from the 24th edition Science and Health through the 33rd edition, Eddy admitted the harmony between Vedanta philosophy and Christian Science. She also quoted passages from an English translation of the Bhagavad Gita. Rather conveniently these editions are not readily available online, and MBE biographer Gillian Gill claims the Hindu references were introduced by Ms. Eddy’s editor, Reverend James Henry Wiggin (p. 332-333).

Mary Baker Eddy claimed that her work was “hopelessly original.”1 But was it? Are we to believe that her philosophy and her system of mind healing came to her through divine inspiration, without any influence from the intellectual preoccupations of her times?

In fact, nearly everything in her teachings, as laid out in her textbook, Science & Health, with Key to the Scriptures, had antecedents in contemporary and historical thinkers. Whether she consciously recognized it or not, her philosophy was influenced and shaped by ideas originated and enlarged by others.

The notion of spiritual healing was hardly new in the 1870s when she was writing Science & Health. The Catholic Church documents miraculous healings (Intercession of the Saints), and Martin Luther touched on the topic as well. As for mental healing, the idea that people’s thoughts have some influence over their physical condition was certainly not new. The ancient physician Hippocrates (460 BC – 377 BC) is famously attributed with saying:

Everyone has a doctor in him or her; we just have to help it in its work. The natural healing force within each one of us is the greatest force in getting well.

The Bible was hugely influential in Eddy’s day. Healings appear in both the Old and New Testaments, and religious laity generally accepted spiritual healing as real. Indeed, many spiritual healers were practicing various versions of it. John Alexander Dowie, described by one historian as “the most important and notorious divine healer in America,” founded the International Divine Healing Association in 1886.2 Eddy was by no means alone.

In the non-religious sphere, natural scientists, philosophers, physicians, and others in history pondered the relationships between mind and body. Plato, Galen, Descartes, Kant, Gassner, Mesmer and others, all sought an understanding of the mind/body connection.

But the indisputable primary influence on Eddy was the mesmeric healer Phineas Parkhurst Quimby, with whom she studied for three years. Quimby’s ideas derived from a philosophical current with roots in the Enlightenment. Caroline Fraser explains:

Many philosophers had, of course, already made pronouncements that asserted the primacy of mind over matter. Eddy would imbibe them through Quimby. There were the theories of the Irish bishop George Berkeley (1685-1753) that there was no substance but spirit, and the German philosopher Friedrich Schelling (1775-1854), who held that “nature is spirit visible, and spirit is invisible nature.” Emanuel Swedenborg (1688-1772) and other idealist philosophers proclaimed that “mind is the only substance.”3

Exploring all of Eddy’s sources of inspiration on one’s own can become a study in esoteric minutia, so we will attempt to provide a sweeping overview and resources for those who are interested to read further. With this in mind, the Ex Christian Scientist will present a series of posts examining whose ideas shaped the theology of Mary Baker Eddy’s Science and Health.