By Marie, an Ex-Christian Scientist Group contributor. Marie is a pseudonym.

The college encouraged school spirit. They told you to spread the word about how great the place was. You felt pressure to participate in your House’s events. Some asked you to leave your doors open. You had no choice but to leave them unlocked. The door locks had been broken, if the doors were built to have locks at all. If items were stolen, students were taught to pray about attachment to material objects.

When I was there, only the women’s dorms were locked and only during certain hours. We had no control over this, and sometimes the security guards locked the doors early or forgot to lock them entirely. Because students didn’t need to carry keys most of the day, women often forget their keys and got locked out or had a virtual curfew that men didn’t worry about. Whenever students discussed the injustice and sexism of this practice, people replied, “Life isn’t fair.” Even after a male student was beaten by a group of men who came from off campus, it was up to the male students to decide whether to lock their dorms. We were told that state law required women’s dorms to be locked. When brought up specifically with the administration, they admitted that this was untrue. Administrators blamed ‘student rumours’ on this falsehood.

Men and women lived in separate hallways, usually separate dorms. Spying on and reporting one another for breaking rules, including visiting the hallway or room of the opposite sex during specific hours, was called moral courage.

People occasionally disappeared. It was a mystery as to whether they were suspended due to having sex, falling ill, or getting hurt and taking medicine or staying in the hospital, or attempting to commit suicide. Perhaps they simply transferred to another school, or maybe they committed an actual crime. Rumours ran rampant because, (1) people fiercely guarded their frequently violated privacy, and (2) speaking about ‘bad’ things was discouraged.

This made activism difficult. Pointing out the evil in the world and fighting it with material means was looked down upon and outright silenced. It was more important to focus on the community than on the outside world. Then again, protesting the administration was also highly regulated if allowed at all. For example, at that point, students could only be homosexual if they actively tried to pray the gay away and remained celibate. Protesting this rule was considered ‘homosexual activity’ which was forbidden.

The campus itself was beautiful and clean. The school offered several amazing opportunities, including a fabulous array of abroad programs. Most of us felt comfortable leaving our bags out when grabbing lunch, trusting that nothing would be stolen in this small religious community. Considering the very limited options, the food was good, and the dorms were lovely. The dorms were one of several things that reminded me of Harry Potter. We were an incestuous, tiny school of magical outsiders.

I began to hate the place. It was like being smothered by a soft blanket. Everyone was so nice. Rules were enforced and lives were ruined with a smile. All that would seem bizarre to the outside world was considered completely normal. “Just because the rest of society does it, doesn’t mean it’s right!” they’d say.

The school seemed to deal more harshly with students who engaged in consensual sex than those who harassed or assaulted others. The latter needed to be ‘helped’ and healed, while the former should have known better. Many students shared their horrible experiences with the administration over this matter.

I had several bad experiences with a male student who harassed and abused many other women. I finally reported him when he trapped me in a laundry room and turned out the lights. He threatened my friend because I wouldn’t continue to go out with him, but I felt like I had to keep an eye on him since my friend couldn’t lock her door against him.

The administrator I reported him to wanted to punish him with an instruction to stay away from me. He had done this to many women, many of whom had reported him. Weren’t there harsher punishments for repeat and/or dangerous offenders like him? I had to convince her to do something more than that, so she left the decision entirely up to me. He had been my friend for several years, and I still pitied him even though I also feared and hated him. I couldn’t make a clear decision. The administrator finally listened to me when I mentioned his belief that he could hypnotize people. She considered this more serious than physical threats.

In the days following that incident, I thought he was ‘mentally malpracticing’ me. I didn’t realize that my symptoms were the result of trauma. There were no counselors on campus, only practitioners who prayed for you. But when I desperately went to the practitioners’ offices, over and over again, no one was there. After a fear-filled days and nights, the administrator asked me to meet up with him. I was extremely reluctant to do this, but I’d do it to stop him from hurting others. The administrator said my friends would be there as well. However, right before the meeting, she left a phone message saying that the offender felt ‘trapped’ by the idea of being confronted by more than one person.

The administrator often complimented the other student to me. He was polite to her and didn’t express self-righteousness. He was ‘humble and calm’. It pained me to hear this woman, whom I assumed had been trained in some way, to be entirely taken in by the person who had purposefully hurt and terrorized me, who had lied left and right. He ‘greeted’ me outside of the meeting room with an alarming expression of anger and betrayal. I sat only a few feet away from him.

The student cried crocodile tears (I had seen them before) and said he didn’t mean to hurt me. The administrator was entirely convinced by his side of the story and worked from the basis that he didn’t know what he was doing. She told him that I had been scared by his actions and that I had gone to a dark place, like a small child, because of what he’d done. I felt humiliated. I had tried to hide my fear from him because I knew he intended to frighten me. But the administrator matter-of-factly gave him this satisfaction right in front of me.

She also told him I was there because I was his friend. My shocked expression prompted her to smile and ask if that was incorrect. I said I was there so he wouldn’t do this to anyone else. At the end of the meeting, she offered him support—prayerful and educational sessions. I had to specifically ask for help: “What about me?” She said, of course, I could have it as well, if I needed it. Somehow, the victim had become an afterthought, and the abuser was the one who won her sympathy.

The administrator was never fully clear about his punishment with me or any of the other women he abused. Though his work hours were cut back, he kept his job in security and supposedly wrote his victims a ‘lovely letter’ which we never received.  The administrator told another victim that she didn’t want her to have any anger towards this man who had made her life hell and that she needed to forgive him.

The administrator was helpful enough to ask one of my professors for an extension at my request, though she told the professor that my case wasn’t ‘egregious’. In fact, the administrator thanked me, not for my courage to stand up for myself or for other victims, but for his sake:

“He did internet research which made him realize how seriously many states take his type of actions. He expressed gratitude that he was learning this in school setting rather than a criminal one. He wrote a lovely letter apologizing to all the women. There was not a word of self-justification in it. … Thank you so much for helping him learn this essential lesson. From my experience with this sort of case, I think it went well and everyone gained.”

She welcomed constructive criticism. Earlier, I tried to correct her perception that he had changed and that he was well-intended. I tried to tell her what aspects of the process I found difficult. But I was too polite—too scared, too self-doubting, too tired, and too brainwashed. The case was not ‘egregious’, but apparently it was ‘criminal’. Of course, the school often mistook a lack of federal funding for a pass to break the law. Their treatment of student workers and even professors was sometimes illegal. They justified this by either claiming they were in the right or by saying they simply made ‘mistakes’, which always needed to be forgiven. 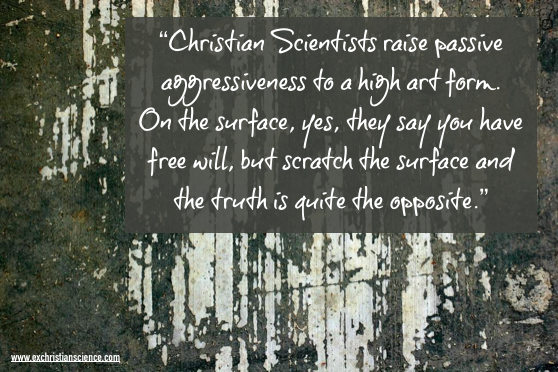 It was a strange place. Questioning was discouraged, in spite of college being an institution for learning. The worst part was being one of few people to find the rules and attitudes harmful, intrusive, and unacceptable. No matter how odd and unethical the school’s practices were, we who challenged them were the crazy ones. Because I was still a Christian Scientist at the time, my feelings on the school were extremely complicated. On the one hand, I was filled with what I thought was justifiable frustration and a desire to help others. On the other hand, I believed that I needed to love these people who hurt others, ignorantly or not, and that it was wrong to be so angry.

The young man had ignored my voice, and then the administration refused to listen to me. I felt helpless. The school fostered this helplessness by treating us like children: our privacy invaded and our independent ideas quashed. But they took care of us! They told us what to think and do, but they gave us shelter, food, and a good education.

That’s why it felt like being smothered by a soft blanket.

We were supposed to be thankful to them for silencing our screams.