The following is a collection of contributions from members of the Ex-Christian Science collective about childhood health and safety issues they faced growing up in Christian Science. Once I was at a friend’s house, and the mom handed me a Flintstones vitamin at dinner and I FREAKED. OUT. I jumped out of my seat and ran to hand it back to her with a breathless “I’maChristianScientist!” She looked at me so confused and said, “It’s just a vitamin.” And I launched into a mangled six-year-old’s explanation of Christian Science. I feel like they didn’t have me over again after that.

The problem with not being allowed to have something that everyone else in the general population takes for granted, and more so being told it is wrong, is that it leads to trying it anyway and sometimes in the wrong way. I was very curious about medicine and actually went so far as to steal a little tin of Bayer Aspirin. I locked my little brother and myself in the bathroom and made him try one first. Of course they tasted bitter and horrible and we spat them out. To this day I don’t remember how I disposed of them. Worse was stealing a bottle of pills from a drugstore in the days when many drugs were on the shelf. I waited until my grandfather was in another aisle and whipped it into my pocket. They were tiny brown pills, god knows what. I took them to school and told my friends I had to take them. I was desperate to fit in. 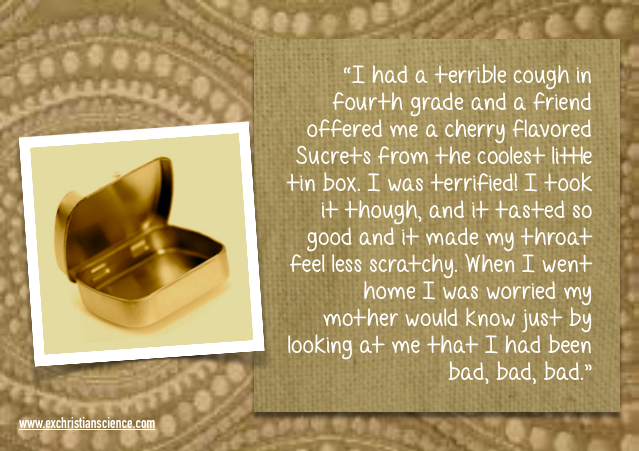 Until now, only my wife has known this embarrassing truth: at age 37 when I was first properly under the care of a doctor and was put on a few month-to-month prescriptions, I switched to Target pharmacy because they had red prescription bottles, and I had them all arranged artfully on my bedside table. 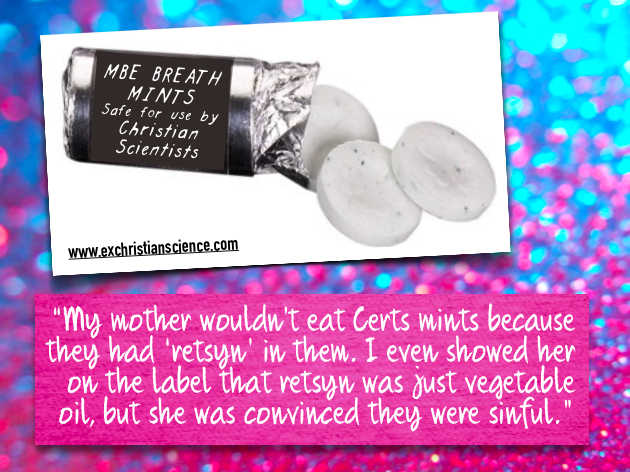 When I was six or seven, I got a pre-made Easter basket, and deep inside was a bottle of ‘Vaseline medicated lotion.’ Do you remember how it used to say that? I can’t imagine what the ‘medication’ was; anyway it was instantly my most prized, secret possession until my dad caught me showing it off to my cousin and made a huge scene and took it away. My non-Christian Scientist cousin must have thought we were complete nitwits. My mom calls a Christian Science practitioner daily. She serves as my mother’s therapist. Fortunately, the CSP is a woman of reason and has encouraged my mom to not be so upset by this or that.

My mom has never met this woman, as she lives several states away. Of course, my mom credits every medically treated recovery her non-Christian Scientist family has—and that is everyone in the family—to her practitioner’s ‘work’! We don’t argue with her. Since the CSP serves more as a therapist/friend and is a very practical person, she is willing to help my mom no matter what the situation.

My mom was in the hospital a couple of years ago and in the ICU for the first few days. We didn’t think she was going to make it, but the treatment she was getting in the ICU pulled her through. When she was moved to a regular room in the hospital and able to think more clearly, she called her practitioner who supported her by praying for mankind, not for my mom specifically. My mom considers her recovery from this very serious issue a Christian Science healing and gives credit to the practitioner.

I don’t think her practitioner would ever admit to helping a patient who is on meds. My sister and I called the CSP at one point to let her know that my mom vitally needed her daily meds and to encourage my mom not to give them up. We believe that the practitioner did do this at our request. She probably didn’t know our mom was on meds until we told her. I am grateful for her kindness and pragmatism. By Abigail, an Ex-Christian Scientist Group Contributor. Abigail is a pseudonym, to ensure anonymity.

Throughout the parental situations I’ve encountered, my parents have all been conscious and able to make their own decisions, so I haven’t felt like I could force the medical issue. That hasn’t lessened the guilt I feel for not somehow forcing them to get medical care. Thankfully, my dad’s passing was relatively quick and painless.

Christian Scientists make decisions they feel are right for them, but they don’t understand how they are harming the younger generations. It’s not just young children who suffer because of their parents’ choices.