The Principia School and College experienced measles outbreaks in 1985, 1989, and 1994. The following are related articles from newspapers, academic journals, CDC reports, books that discuss the outbreaks, and Principia College’s policies regarding immunization as of February 2014.

A 2009 article in The St. Louis Post-Dispatch provides a brief overview of the events:

In 1985, three Christian Scientists affiliated with Principia College in Elsah died, and 712 students were quarantined on campus, when an outbreak of measles sickened more than 100 people.

In 1989, another measles outbreak at Principia sickened nearly 100 people, including some off campus, not affiliated with the school.

In 1994, another outbreak spread to the Principia, which serves students pre-K through senior high in St. Louis County. Nearly 200 people contracted measles that year, including a doctor from Barnes-Jewish Hospital and an infant, both of whom were infected by Principia students off campus. Hundreds of Principia students and their parents ultimately decided to be vaccinated during the outbreaks, but many opted against vaccination. (source) 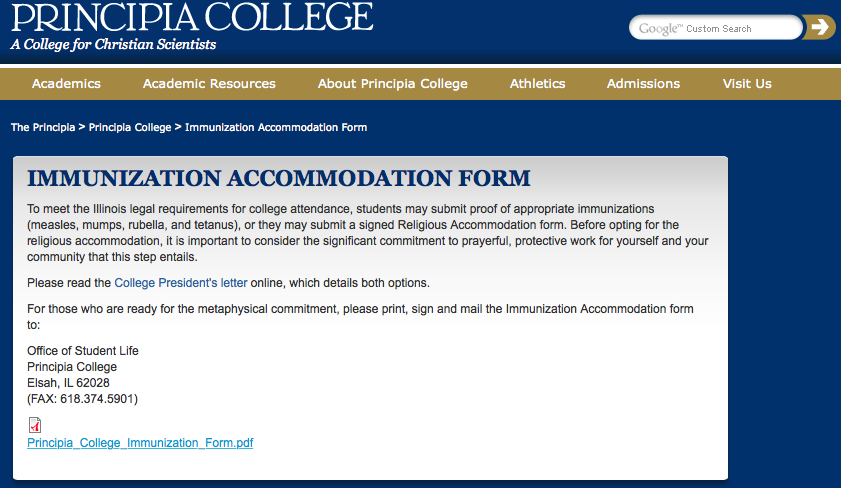 Letter from the President (Feb. 2014) detailing responsibility to the campus re: communicable disease and prayer.

The high attack rate (15.9%) at Principia College is undoubtedly due to these students’ very low immunization levels. This outbreak illustrates the potential severity of measles and the rapidity of spread in an unvaccinated population. The very high apparent death-to-case ratio (2.3%) is unusual in the United States, which usually has a reported death-to-case ratio of 0.1% or lower. The reasons for this high mortality are under investigation.

The largest [outbreak] occurred at Principia College, a Christian Science college in Illinois (1). One hundred twenty-eight cases were reported between January 15 and March 10, including 113 among students and 15 among other residents. Three deaths related to respiratory complications of measles occurred among students and residents at the college.

The other outbreak among persons opposed to vaccination began in two contiguous counties along the Illinois-Missouri border on April 4 when a Christian Science high school student became ill after skiing in Breckenridge, Colorado during a measles outbreak there. This student lived with her family on campus at Principia College, a Christian Science college in Jersey County, Illinois and commuted daily to the Principia Christian Science School (grades K-12) in St. Louis County, Missouri.

Molecular Epidemiology of Measles Virus: Identification of Pathways of Transmission and Implications for Measles Elimination — Retrieved from http://jid.oxfordjournals.org/content/173/1/32.full.pdf

5 Replies to “The Principia & The Measles”