These comments are an education. There ought to be a course in the training of psychiatrists about Christian Science and the processes involved when former adherents leave it.

I find most people I talk to sort of slide out of Christian Science slowly and not violently. I also had a very long and painful exodus from Christian Science. Every year that goes by it gets easier, though. I never thought I’d make it to the point where I could even have a sense of humor about it, but here I am! Ultimately, I sought out one of Los Angeles’ only ‘exit counselors’ for therapy—someone skilled in helping people break away from cults. She hadn’t actually worked with a Christian Scientist before, but was well acquainted with the religion. It was great to talk to someone who understood about the mind control, fear of being struck by a bolt of lightning once you left, etc. The unspoken damage is the personality disorders, depression and anxiety that being in this kind of cult leaves behind. Rarely do people even make the connection. 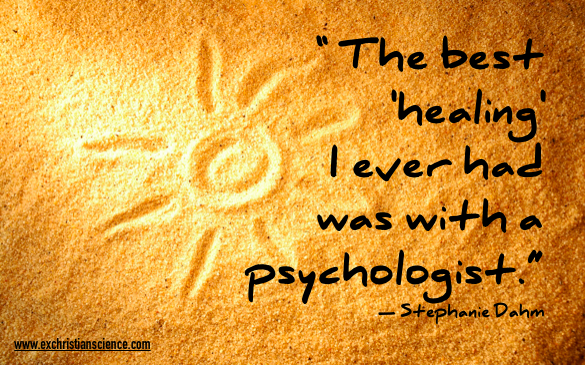 One of the corner stones of cognitive behavioural therapy (CBT) is teaching people to abandon fixed thinking (the tyranny of the ‘shoulds’). This is especially important for ex-Christian Scientists, because all our training growing up told us to ignore what we can see and feel and concentrate instead on what we should be seeing and feeling until it happens.

My psychotherapist has helped me with PSTD, trauma issues, and survivor’s guilt issues related to my upbringing in Christian Science. We are indeed survivors.